Green Island Technology: Comprehensive R&D of scientific and technological R&D to occupy the commanding heights of the market

Zhejiang Lvdao Technology Co., Ltd. is an enterprise specializing in the production and research of aerosol products. In recent years, the company has relied on technology research and development to continuously improve its market competitiveness.

Walking into the production workshop of Lvdao Company, there is a busy scene everywhere. On the long assembly line, a can of aerosol came out after going through the process. Dozens of workers had a clear division of labor and ordered the aerosol packaging boxes in an orderly manner. 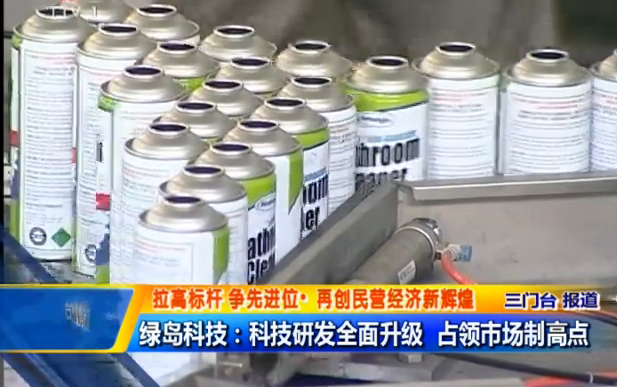 As one of the domestic aerosol industry standing committee units and one of the standard drafting units, \"Green Island\" has always adhered to technological innovation and continuously increased product research and development efforts. At present, the company has established a leading domestic management and technical team, mainly engaged in the research, development, production and sales of more than 200 varieties of aerosol and washing products such as household and car cleaning. In order to further expand its market share, in recent years, the company has shifted its R&D direction to brand-new fields such as cosmetics, food, and automobile maintenance. It is expected that some newly developed products will be put on the market within the year.

Wang Xiaobing, Technical Director of Zhejiang Lvdao Technology Co., Ltd.: "(Future research and development direction) We still go with high-end, similar to the like cosmetics, food and medicine, and make it into an aerosol form."

The continuous breakthroughs in technological R&D have strongly promoted the company's continuous leaps. In 2015, Green Island's total sales reached 310 million yuan, and profits and taxes were 17 million yuan. In the first quarter of 2016, sales reached 61 million yuan, an increase of 6.66% year-on-year . Products are exported to Europe, America, Middle East, Africa, Southeast Asia and other countries and regions.

Hu Ming, Executive Director of Zhejiang Lvdao Technology Co., Ltd.: \"Lvdao is mainly one of international trade, the second is domestic trade, and the third is a growth point this year. It is a domestic OEM market, that is, processing , Then this year's market is expected to grow by more than 30 million."