Lvdao Technology is one of the largest enterprises in China's aerosol industry. It is mainly engaged in the research, development, manufacturing and sales of air freshener series, laundry detergent and car cleaner series. In recent years, companies have continuously increased R&D investment , Into the field of food aerosols, the efficiency continues to increase. 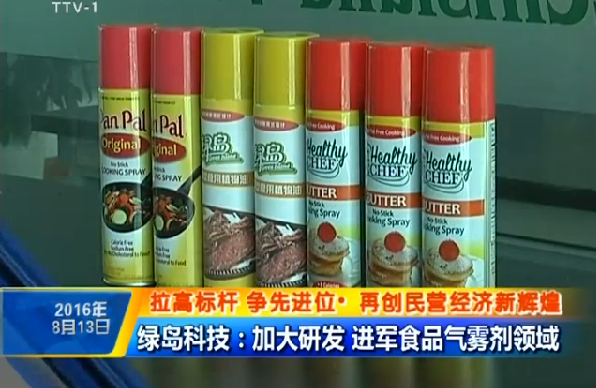 In the 10,000-level purification workshop newly built by Zhejiang Lvdao Technology Co., Ltd., the company introduced two new production lines dedicated to the production of food aerosols this year. These two production lines can produce 100 cans of aerosol in one minute, and only six workers are needed.

Hu Ming, Executive Director of Zhejiang Lvdao Technology Co., Ltd.: \"At the end of 2014, we were granted a national aerosol research and development center. In April 2016, we obtained a food safety production license, which laid a solid foundation for the company to further develop food products. A good foundation."

In recent years, food aerosols have gradually emerged and are widely used in European and American countries. Data shows that in 2015, global production of food aerosols exceeded 540 million cans, and it is expected to reach 3.15 billion cans by 2017. In China, food aerosols The production and use of agents are still in the embryonic stage, therefore, the market potential is huge.

Shen Xiancan, manager of the technical department of Zhejiang Lvdao Technology Co., Ltd.: \"It (food aerosol) is mainly convenient and fast, and then it can reduce the intake of oil and fat, so it is very good for health. "